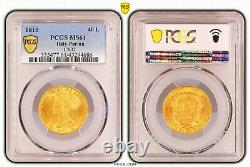 1815, Parma, Marie Louise of Austria. She was also French Empress and 2nd wife of Napoleon. Mint Year: 1815 Denomination: 40 Lire Mint Place: Milan (Italy) Condition. Certified and graded by NGC as MS-61! 900 Weight: 12.90gm Diameter: 26mm. Obverse: Diademed bust of Marie Louise of Austria as Duchess of Parma, Piacenza and Guastalla left. D' AUSTRIA (privy mark) 1815 (privy mark). Reverse : Crowne coat of arms of the Duchy of Parma, within order collar. The Duchy of Parma was created in 1545 from that part of the Duchy of Milan south of the Po River, as a fief for Pope Paul III's illegitimate son, Pier Luigi Farnese, centered on the city of Parma. In 1556, the second Duke, Ottavio Farnese, was given the city of Piacenza, becoming thus also Duke of Piacenza, and so the state was thereafter properly known as the Duchies of Parma and Piacenza. In 1808 the duchies were annexed to France, by Napoleon Bonaparte.

In 1814, the they were restored under his Habsburg wife, Marie Louise, who was to rule them for her lifetime. After Marie Louise's death in 1847, the Duchy was restored to the Bourbon-Parma line, which had been ruling the tiny Duchy of Lucca. The duchies of Parma and Piacenza joined with the Grand Duchy of Tuscany and the Duchy of Modena to form the puppet United Provinces of Central Italy in December 1859, and were annexed to the Kingdom of Sardinia in March 1860. The House of Bourbon continues to claim the title of duke of Parma to this day. Carlos-Hugo (Carlist pretender to the Spanish throne in the 1970s) has held the title since 1977.

She was the second wife of Napoléon Bonaparte and thus Empress of the French. She was also a double grandniece of Marie Antoinette.

In addition to her native German, she became fluent in English, French, Italian, Latin, and Spanish. On 11 March 1810, the 18-year-old archduchess married French Emperor Napoléon I by proxy, with a subsequent ceremony taking place in the chapel of the Louvre on 1 April 1810. The bride's father intended the marriage to strengthen links between the Austrian Empire and the First French Empire. Napoleon sought the validation and legitimation of his Empire by marrying a member of the House of Habsburg, one of the oldest ruling families of Europe. He also hoped to cement his position by fathering a legitimate heir. Napoleon had previously tried to marry Grand Duchess Anna of the House of Romanov, younger sister of Tsar Alexander I of Russia, but his proposal had been refused. When Marie Louise moved to France, she brought with her a number of Austrian recipes. She developed a recipe for roquefort-stuffed chopped beef that later became quite popular in restaurants.

On 20 March 1811, Marie Louise (as she was known in France) gave birth to a son, Napoléon François Joseph Charles Bonaparte, styled King of Rome and later Duke of Reichstadt. Marie Louise acted as Regent of France from April to December 1812 during the Russian campaign and again from April 1813 to January 1814 during her husband's absence in the German campaign. After Napoléon was forced to abdicate his throne in April 1814, he was exiled to the island of Elba. Napoléon claimed at one point to prefer Marie Louise to his first wife Joséphine de Beauharnais; while he had loved Joséphine, he claimed, he had not respected her, whereas with Marie Louise, there was "Never a lie, never a debt" - presumably a reference to Josephine's rumoured extramarital affairs and reputation as a spendthrift.

After Napoleon's abdication in April 1814, Marie Louise and her son fled Paris to Blois, and then to Vienna. The Treaty of Fontainebleau of 11 April 1814 allowed her to retain her imperial rank and style (Her Imperial Majesty The Empress Marie Louise) and made her the ruler of the duchies of Parma, Piacenza, and Guastalla, with her son as heir. However, in 1815, the Congress of Vienna revised this arrangement and made her Duchess of Parma for her life only, with the details of who would become Duke of Parma after her death unspecified. In 1817, a treaty was signed which would leave the duchies to a member of the House of Bourbon. In 1844 it was determined that the duchy of Guastalla would be inherited by the Duke of Modena.

This item is in the category "Coins & Paper Money\Coins: World\Europe\Italy, San Marino, Vatican\Italian States (up to 1861)". The seller is "coinworldtv" and is located in this country: AT.