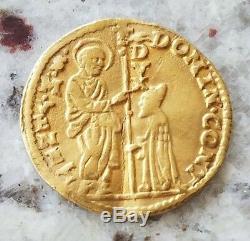 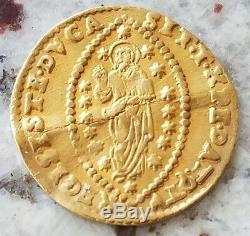 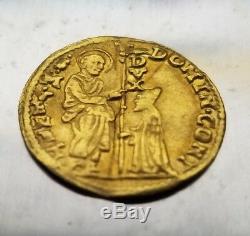 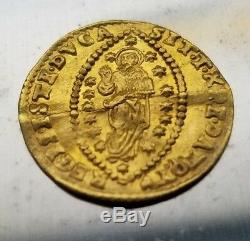 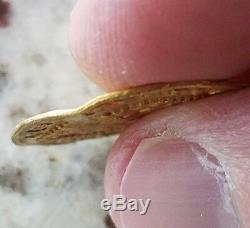 995 fine gold coin is guaranteed genuine, and is about 350 years old. It was hammered out in Venice, Italy, then an independent City State. Venice issued these gold ducats from the 1200s until the last Doge of Venice was forced to abdicate by Napoleon in the 1790's. It appears not to be clipped, and the legends and devices are easily legible and recognizable. Doge Giovani Pesaro died suddenly on September 30, 1659, with no obvious successor.

There were no strong candidates, only three weaklings: Alvise Contarini, Andrea Pisani, and Lorenzo Dolfin. According to the custom of the Republic of Venice, the Doge was elected by a group of 41 electors, chosen basically at random. Unable to settle on one of the candidates, and dissatisfied with the selections available, a compromise was worked out, and, on the eighth ballot, cast on October 16, 1659, 40 votes were cast for Domenico Contarini, breaking the impasse, and recalling Contarini from his retirement.

Many noblemen were furious at the election of Contarini. Noblemen believed that a young, martial leader was needed, not a septuagenarian like Contarini. Yet, throughout the seventeenth century, Venetian electors repeatedly preferred to elect old men as Doge so that the Doge did not grow too powerful: it was feared that a younger, more martial Doge would be likely to expand his power base and move the Most Serene Republic in a more monarchical direction. Although he was surprised by his election, Contarini was happy to accept the post.

He was popular with the people, who felt that he had never been overbearing during his public career. In spite of his advanced age, Contarini's reign as Doge lasted for sixteen years, and during that time he was able to bring a measure of political stability to Venice after a period which had seen multiple Doges in a short period of time. In Contarini's first decade as Doge, the war with the Ottoman Empire grew more intense. Thus, the Venetian treasury was depleted, merchant families were ruined, thousands of Venetian men were killed, and yet the siege continued. Domenico Contarini was widely praised in these years for his poise, and the nobility of his spirit, in carrying on the fight.