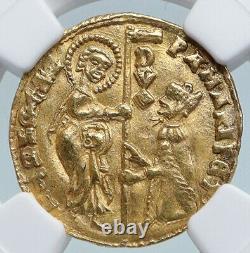 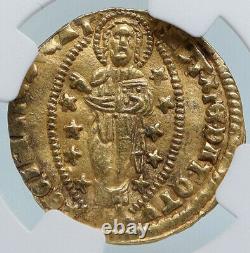 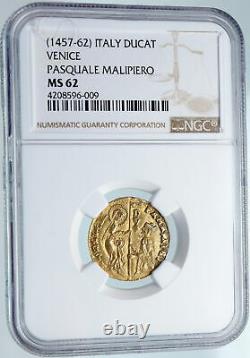 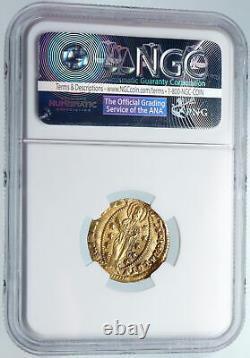 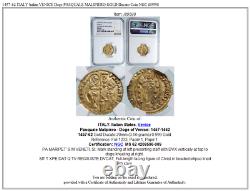 SIT T XPE DAT Q TV REGIS ISTE DVCAT, Full-length facing figure of Christ in beaded ellipse lined with stars. (1392 in Venice May 7, 1462 in Venice) was a Venetian statesman who served as the 66th Doge of Venice from October 30, 1457 until his death. He succeeded Francesco Foscari, and was specifically elected by enemies of the Foscari family.

In 1458, he signed into law a number of measures limiting the power of the Council of Ten. He was interred in the Basilica di San Giovanni e Paolo, a traditional burial place of the doges.

He was succeeded as Doge by Cristoforo Moro. He was married to Giovanna Dandolo. Mark the Evangelist is the traditionally ascribed author of the Gospel of Mark. Mark is said to have founded the Church of Alexandria, one of the most important episcopal sees of Early Christianity. His feast day is celebrated on April 25, and his symbol is the winged lion.

Mark the Evangelist is sometimes depicted as a bishop on a throne decorated with lions or as a man helping Venetian sailors. Some Christian legends refer to Saint Mark as "Saint Mark The Lionhearted".

These legends say that he was thrown to the Lions and the animals refused to attack or eat him. Instead the Lions slept at his feet while he petted them. When the Romans saw this, they released him, impressed by this sight.

Jesus (7-2 BC to AD 30-33), also referred to as Jesus of Nazareth or Jesus Christ, is the central figure of Christianity, whom the teachings of most Christian denominations hold to be the Son of God. Christians believe Jesus is the awaited Messiah (or Christ, the Anointed One) of the Old Testament. Virtually all modern scholars of antiquity agree that Jesus existed historically, and historians consider the Synoptic Gospels (Matthew, Mark and Luke) to be the best sources for investigating the historical Jesus.

Most scholars agree that Jesus was a Galilean, Jewish rabbi who preached his message orally, was baptized by John the Baptist, and was crucified by the order of the Roman Prefect Pontius Pilate. In the current mainstream view, Jesus was an apocalyptic preacher and the founder of a renewal movement within Judaism, although some prominent scholars argue that he was not apocalyptic. After Jesus' death, his followers believed he was resurrected, and the community they formed eventually became the Christian church. The widely used calendar era, abbreviated as "AD" from the Latin "Anno Domini" ("in the year of our Lord") or sometimes as "CE", is based on the birth of Jesus.

Christians believe that Jesus has a "unique significance" in the world. Christian doctrines include the beliefs that Jesus was conceived by the Holy Spirit, was born of a virgin named Mary, performed miracles, founded the Church, died by crucifixion as a sacrifice to achieve atonement, rose from the dead, and ascended into Heaven, whence he will return. Most Christians believe Jesus enables humans to be reconciled to God, and will judge the dead either before or after their bodily resurrection, an event tied to the Second Coming of Jesus in Christian eschatology; though some believe Jesus's role as savior has more existential or societal concerns than the afterlife, and a few notable theologians have suggested that Jesus will bring about a universal reconciliation. The great majority of Christians worship Jesus as the incarnation of God the Son, the second of three persons of a Divine Trinity.

A few Christian groups reject Trinitarianism, wholly or partly, as non-scriptural. In Islam, Jesus (commonly transliterated as Isa) is considered one of God's important prophets and the Messiah, second in importance only to Muhammad.

It is situated across a group of 118 small islands that are separated by canals and linked by bridges. These are located in the shallow Venetian Lagoon, an enclosed bay that lies between the mouths of the Po and the Piave Rivers. Parts of Venice are renowned for the beauty of their settings, their architecture, and artwork. The lagoon and a part of the city are listed as a World Heritage Site.

In 2014, 264,579 people resided in Comune di Venezia , of whom around 55,000 live in the historic city of Venice (Centro storico). Together with Padua and Treviso, the city is included in the Padua-Treviso-Venice Metropolitan Area (PATREVE), with a total population of 2.6 million. PATREVE is a statistical metropolitan area without any degree of autonomy.

The name is derived from the ancient Veneti people who inhabited the region by the 10th century BC. The city was historically the capital of the Republic of Venice. Venice has been known as the "La Dominante, " "Serenissima, " "Queen of the Adriatic, " "City of Water, " "City of Masks, " "City of Bridges, " "The Floating City, " and City of Canals. The Republic of Venice was a major financial and maritime power during the Middle Ages and Renaissance, and a staging area for the Crusades and the Battle of Lepanto, as well as a very important center of commerce (especially silk, grain, and spice) and art in the 13th century up to the end of the 17th century. The City State of Venice is considered to have been the first real international financial center which gradually emerged from the 9th century to its peak in the 14th century. This made Venice a wealthy city throughout most of its history. It is also known for its several important artistic movements, especially the Renaissance period. After the Napoleonic Wars and the Congress of Vienna, the Republic was annexed by the Austrian Empire, until it became part of the Kingdom of Italy in 1866, following a referendum held as a result of the Third Italian War of Independence. Venice has played an important role in the history of symphonic and operatic music, and it is the birthplace of Antonio Vivaldi. Venice has been ranked the most beautiful city in the world as of 2016.

The city is facing some major challenges however, including financial difficulties, erosion, subsidence and an excessive number of tourists in peak periods. World-renowned expert numismatist, enthusiast, author and dealer in authentic ancient Greek, ancient Roman, ancient Byzantine, world coins & more. Ilya Zlobin is an independent individual who has a passion for coin collecting, research and understanding the importance of the historical context and significance all coins and objects represent. Send me a message about this and I can update your invoice should you want this method.

Getting your order to you, quickly and securely is a top priority and is taken seriously here. Great care is taken in packaging and mailing every item securely and quickly. What is a certificate of authenticity and what guarantees do you give that the item is authentic?

You will be very happy with what you get with the COA; a professional presentation of the coin, with all of the relevant information and a picture of the coin you saw in the listing. Additionally, the coin is inside it's own protective coin flip (holder), with a 2x2 inch description of the coin matching the individual number on the COA.

My goal is to provide superior products and quality of service. How and where do I learn more about collecting ancient coins?

Visit the Guide on How to Use My Store. For on an overview about using my store, with additional information and links to all other parts of my store which may include educational information on topics you are looking for. The item "1457-62 ITALY Italian VENICE Doge PASQUALE MALIPIERO GOLD Ducato Coin NGC i89598" is in sale since Wednesday, March 24, 2021. This item is in the category "Coins & Paper Money\Coins\ World\Europe\Italy, San Marino, Vatican\Italian States (up to 1861)". The seller is "highrating_lowprice" and is located in Rego Park, New York.